Millions of people use a computer on a daily basis for various reasons. With the digital age, it also means that most of our data have also gone digital and you need to keep up or else you will stagnate. It is common knowledge that the majority of computer users use a Windows PC and not Mac devices from Apple mainly because they are more cost-effective and still offer all if not the same functions as what you can usually find in an Apple device. 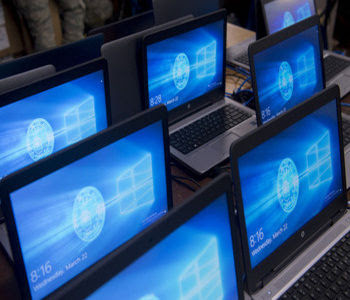 Over the past few years, Microsoft has been raising awareness for the public to make the switch to Windows 10 from its older operating systems. Many have already made the switch and if the estimates are correct, over half of companies are now using Windows 10 on their computers. This growth has been observed despite the slump in PC sales in the last year. It is especially true among enterprise computers or the ones used by big businesses and corporations in their day-to-day operation. This speaks a lot about the trust placed by these corporations on Windows 10 because they consider it as a more secure and productive operating system compared to others.

Sales of Windows 10 Pro intended for enterprise users were up 8% in the most recent quarter, a continuation of consistent growth in this segment for Microsoft over the last year, despite consumers buying fewer and fewer PCs.

Now Microsoft communication chief Frank X Shaw has revealed that more than 50% of enterprise PCs have made the jump to Microsoft’s 3-year-old operating system.

This is also a practical move for these companies to use an OS that is current and supported by Microsoft considering the number of online threats we all face every single day. You’ll have peace of mind knowing that counter-measures can be taken in the face of an attack or hacking because Microsoft will back you up.

Many companies had to learn the hard way when they faced such attacks in recent years where computers were still running on Windows XP and Windows 7, so the damage hurt them a lot in terms of finances and production.

There is a reason why there are many mobile apps that are now offering desktop counterparts. This is because switching between our phones and desktops can be distracting and can take away from our focus, however as much as we would like, not all mobile apps are readily available on the desktop just yet.

However Microsoft is hoping to change that as the company has announced a new feature for Windows 10 called “Your Phone”. This is basically a feature that mirrors what’s on your phone onto your computer. This means that users will be able to use any app on their phone on their computer as it essentially mirrors the content, meaning that users won’t have to wait for developers to create a desktop-friendly version of the app.

Since all computer users are smartphone users now and there are also older people who have no computer skills whatsoever actually have smartphones because it is not only the norm but for convenience too. There are slight variations between the smartphone and computer experience but Microsoft is aiming to make a seamless experience for the Windows 10 OS whether you use a smartphone or a computer because of its mirror effect dubbed as the “Your Phone” feature.

It was already included in the October Windows 10 update and is readily available among Android smartphone users. It translates to a computing experience that is unlike any other since you are essentially able to do everything you do on your Windows 10 computer on your smartphone.

Hopefully, it will be able to save you from the woes of data loss because you can now access files on both devices. But while this is still a novelty, better arm yourself with data recovery knowledge to help you better deal with data loss. Expert services like https://www.harddriverecovery.org/pricing.html and https://www.harddriverecovery.org/raid-pricing.html can save a life in the unfortunate circumstance that your device fails.